Welcome to the Institute for Nerve Medicine’s Fall 2013 Case Study.

In this issue, we meet a 30-year-old male who is experiencing a decreased sex drive, along with testicular and gluteal pain.

He reports the pain began in the left testicle while exercising and denies any specific injury or accident. After continuing to play multiple sports, he developed lower back pain with radiating lower extremity pain.

This back pain symptom resolved with an orthopedic surgery; however his testicular pain remained persistent. To help resolve it, he has tried in-network providers ranging from osteopathic medicine, chiropractic treatment, and physical therapy, to no avail.

Yet after exhausting all available options, the patient’s symptoms failed to resolve and now secondary symptoms (such as inner thigh pain and lower abdomen pressure) were developing.

At this point, the patient reported his pain level at 7 out of 10 on the pain scale and continuous. He noted that when he was not active, the symptoms would resolve. Once he restarted his exercise regimen, his symptoms would recur, and over time the recurrence is sooner and the intensity greater.

Upon additional examination and consultation with the Institute for Nerve Medicine’s medical director, Dr. Aaron G. Filler, it was determined that the patient most likely has progressively severe obturator internus spasm that is difficult to surmount. As a result, there is no further strategy to follow involving percutaneous injection-type procedures nor physical therapy or exercise.

Based upon the length of time of the symptoms, permanent nerve damage is a concern, since with increased time elapsed the chances of full recovery are lessened. Surgery is therefore recommended involving a minimal-access approach, resection of the piriformis muscle, and neuroplasty of the nerve to the obturator internus and the pudendal nerve.

Complex Piriformis Surgery, with Sciatic, Obteratur Internus and Gluteal nerve decompression: Because of the interventional MR injection imaging and Neurography study conducted prior to the surgery, the procedure was completed with a minimal-access approach, resulting in minimal blood loss and tissue dissection.

The gluteal fascia was coagulated with bipolar cautery, cut sharply, and using blunt dissection technique, progress was made between leaves of the gluteal musculature until the pre-piriformis fascia was reached. Self-retaining retractors were advanced, and the pre-piriformis fascia was then explored using intraoperative stimulation, allowing identification of the superior gluteal nerve, inferior gluteal nerve and sciatic nerve, each of which were carefully protected.

The pre-piriformis fat pad was then mobilized on the superior, inferior and medial aspect and retracted laterally to fully expose the sciatic nerve.

The piriformis muscle proved to be in 2 segments. The principal segment heavily constituted with tendinous or fibrous tissue impinging upon the nerve. There was heavy muscle and tendon contacting the nerve, and the second, more superior portion seen with a separate point of attachment on the greater trochanter. It was apparent that the more inferior dense portion was involved in the compression.

There was a fibrovascular band complex between the piriformis and the sciatic nerve, which was dissected and removed. Attention was then turned to a retro-sciatic dissection to identify and mobilize the nerve to the obturator internus. There were moderate adhesions in this area, and these were released. The superior gluteal nerve was then identified and also mobilized from some moderate adhesions.

Once all this was completed, the area was irrigated copiously with antibiotic solution. Seprafilm was placed as adhesiolytic agent to all dissected nerve and muscle surfaces. Marcaine was applied. The gluteal fascia was then closed with interrupted stitches.

Post-Operative Condition: Today the patient is about six weeks out from his surgery and overall he is doing quite well. He is especially pleased to have avoided permanent nerve damage and he is optimistic that he will end up doing quite well in the long term.

There has been a very significant reduction in the areas of involvement as well as in the severity of the persistent pain. He is eager to begin exercise but understands that starting a strenuous regimen will decrease the successful outcome of his surgery.

As a result, he is gradually increasing his activity and generally finds that although he may feel some sensitivity during and following the exercise, it seems to lead to progressive improvement in his functional range.

If you or someone you love suffers from similar symptoms, please contact us at the Institute for Nerve Medicine by calling 310-314-6410 between 9AM and 5PM weekdays, or by emailing us at contact@nervemed.com. 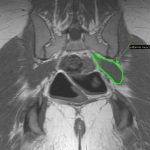