In this case, we meet a female patient who suffered numerous injuries in a car accident years ago, resulting in painful nerve conditions that persisted until she came to the Institute for Nerve Medicine for treatment.

The patient was involved in a motor vehicle accident in 1996 that resulted in severe whiplash laterally. She notes that following the injury she developed left neck pain with radiating upper extremity pain; however, she was diagnosed with stress and referred for stress reduction.

However, in June of 1998 she began developing severe headaches, vertigo and weakness in the left hand. She was diagnosed with herniated disc at C3, C5 and C6 levels. In July of 1998 she underwent a C3-C4 and C6-C7 left posterior foraminotomy. It is not known exactly what happened during this surgery, but it is a possibility that he severed her vertebral artery.

Following the surgery she had significant aphasia that has been persistent most noticeably exacerbated with increased pain. She had significant swelling and no relief of the pain. She continued to have followup and in June of 1999 had a second surgery for a C6-C7 left anterior foraminotomy. Following this surgery she had six months of relief from the pain she was experiencing in the C6 distribution; however, she suffered some trauma to her esophagus.

In 2002 the patient obtained a second opinion and was recommended for a C5-C6, C6-C7 fusion, as well as a left ulnar transposition. Following the surgery the patient had a significant relief of her neck and shoulder pain and also the forearm and hand pain. However, she continued with persistent left occipital pain and intermittent dropping of items with her left hand. In 2003 to 2005 she persisted with upper neck pain and occipital pain further evaluation led to a recommendation for a C3-C4, C4-C5 fusion and in December of 2005 she underwent a C3-C4, C4-C5 anterior fusion. Following the surgery she had an increase in her pain level that continues to be persistent.

Between 2005 and 2010 she continued to have epidurals, nerve blocks and facet blocks with no significant relief. In 2009 she developed bilateral foot pain that was shooting to the knee. She was first evaluated by a podiatrist and recommended for bunion surgery; however, on further evaluation it was found that she had significant herniation of the L5-S1 disc with bilateral pars defect. In August 2009 she had an L5-S1 fusion and this led to complete relief of her lower extremity symptoms.

Currently the patient has significant decrease in range of motion to her neck as any turning to either the right or left will significantly aggravate her pain. The patient has some relief when lying down or sitting in a recliner. She has intermittent blurry vision to the left eye, also intermittent numbness to the left side of her face with increased pain. Currently, she rates her pain as a 5/10 and continuous and intermittent.

Physical Examination: Examination for the upper extremities for the biceps, triceps, wrist flexion, wrist extension, supination, pronation, finger abduction, finger adduction, grip, finger flexion, finger extension, lumbricals, opposition of first and fifth digits, pincer grip, and at the shoulder for internal and external rotation, protraction and retraction, abduction and adduction, with her arm at her side, at 90 degrees, and at 180 degrees revealed some mild hand intrinsic weakness on the left side. No evidence of scapular winging. Adson’s maneuver is positive on the left.

MR Neurography Scans: The MR Neurography of the Left Brachial Plexus noted the multiple cervical spinal procedures from the patient’s history. She had irritative changes in the long thoracic nerve distal to the middle scalene. Additionally there was a mild change in image intensity with no significant change in the course, caliber and contour of the brachial plexus elements as they traverse the scalene triangle.

Open MRI guided Procedure: Based on the physical examination and the MRN-Neurography findings the patient was recommended for a Open MR image-guided approach for percutaneous chemomyolytic ablation of the left anterior and middle scalene muscle, left levator scapula, superior and inferior portions left sternocleidomastoid, the left splenius muscle and chemoneuroplastic treatment of left accessory nerve at the level of the sternocleidomastoid. Medications that were utilized were Marcaine, Celestone and Hyaluronidase. Following the procedure the patient had significant improvement to her significant neck pain that persisted for 5-6 months. She was able to discontinue her pain medications and manage her pain primarily with anti-inflammatories during this period of time. 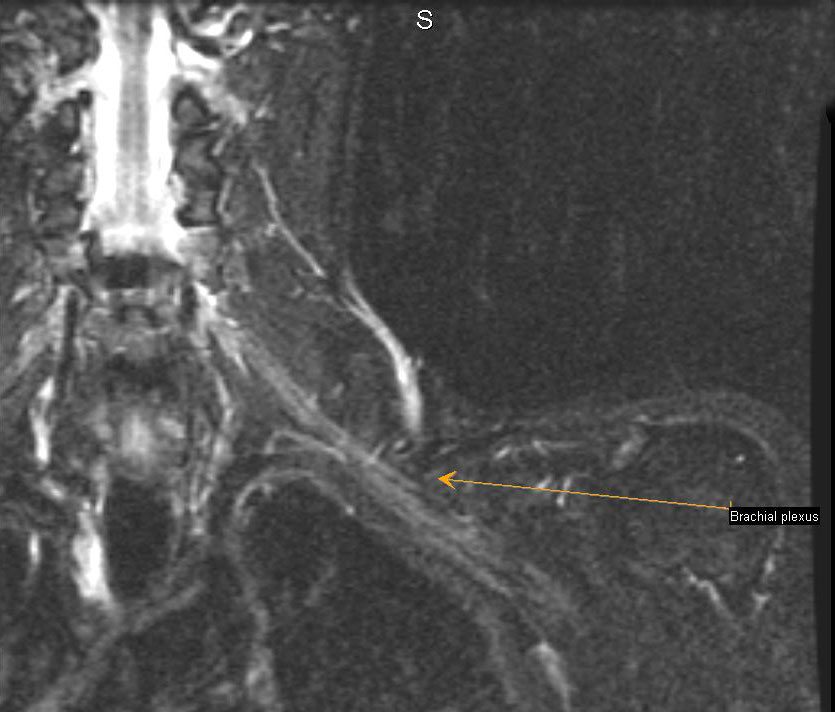 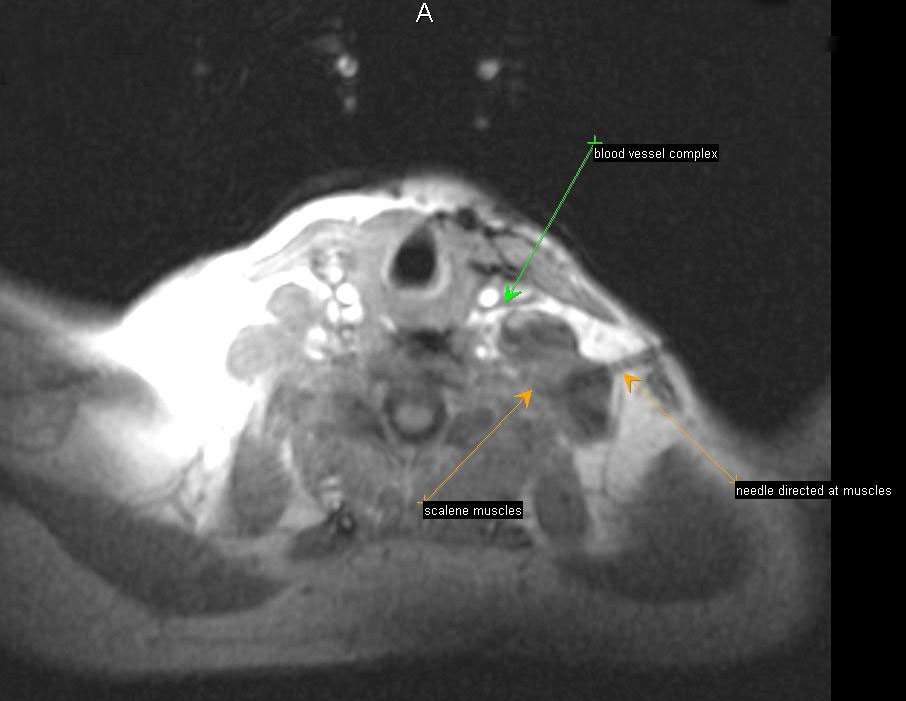 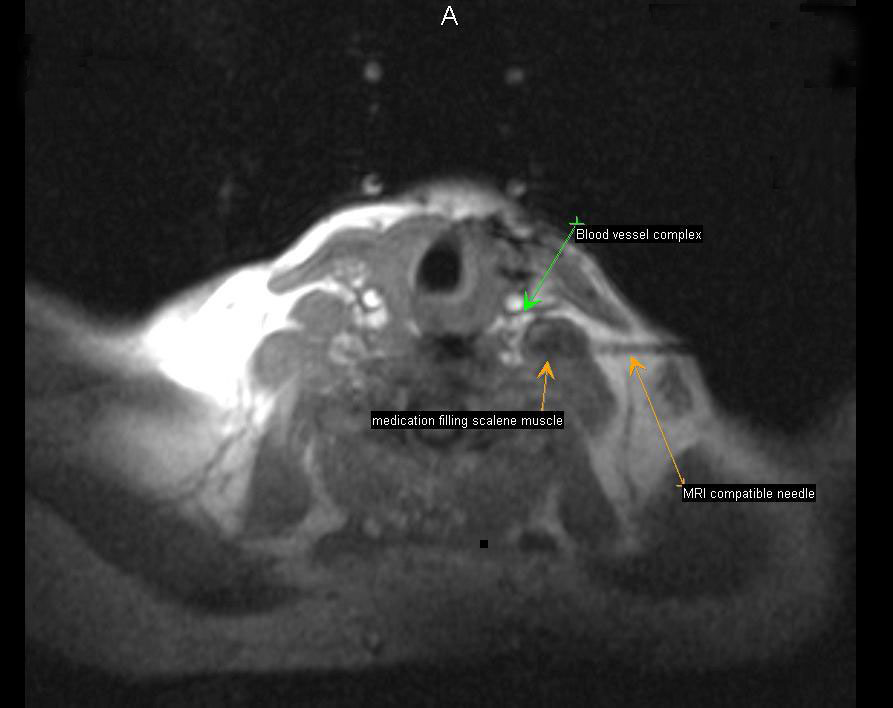 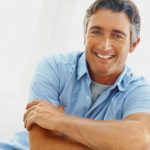 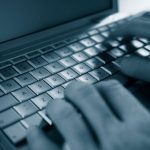